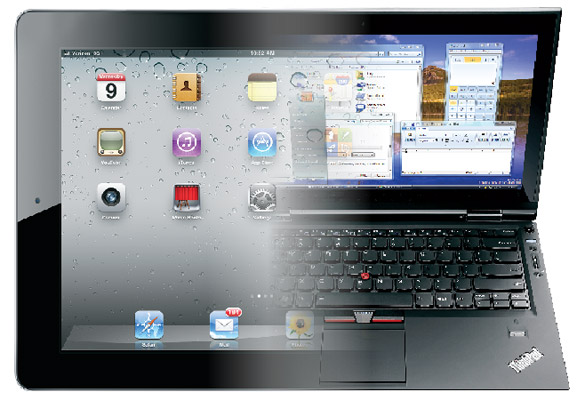 The rise of tablets is the biggest trend in computing over the past few years. According a study released by the Pew Internet and American Life Foundation in June 2013, one-third of all Americans now own a tablet, nearly twice the percentage that owned one twelve months before. Meanwhile, laptop sales have begun to decline. You’ve possibly encountered predictions that the Age of Laptops is coming to an end, and the new Tablet Era is upon us. The truth may be a bit less dramatic however, as there are still some things you can do with a laptop that just aren’t yet possible on a tablet. So whatever the future may bring, if you’re in the market for a portable computer today, you have a choice to make: Tablet or laptop? The answer depends on what you want out of your device.

For one thing, laptops have larger screens. A standard tablet screen is about 10 inches, while smaller versions can be around 7 inches. Even a small laptop screen is typically 11 inches or so, and many are significantly bigger. Another important and immediately visible difference between the two is that laptops come with physical keyboards and tablets don’t. While tastes differ, many people have a hard time adjusting to the touchscreen keyboards found on tablets. True, you can often buy a separate keyboard for your tablet, but this increases your expenses. Another key advantage of laptops is that you can store far more data on them than on tablets. Tablets usually use “solid state storage” memory, which reduces battery use and increases speed, but has far lower capacity.  Finally, laptops are somewhat more durable than tablets.

Tablets also have strengths that you should take into account when making your purchasing decision. Their greatest advantage is portability: even a full-sized tablet is slimmer and lighter than a laptop. Tablets also have battery power that puts laptops to shame. You’ll have to recharge a standard laptop after just three to four hours, and many older models will barely last an hour. Tablets can last for far longer. For example, the best Android tablet in terms of battery life can last for about 11.5 hours of continuous use before the battery runs out. Such staying power compounds the above-mentioned benefit of high portability. With a tablet, you can watch a video, listen to music, or read an eBook for a very long time without worrying about finding an open outlet. That’s something you just can’t do with a laptop. Tablets also usually come with cameras, allowing you to record memories on vacation or do video conferencing for work with the same device.

Laptops are still preferable for heavy-duty work. They come with more convenient hardware like bigger screens and real keyboards, can hold more data, and are less destructible. Tablets, however, are far more mobile than even the lightest laptop, and far easier to use on the go. Often, the deciding factor between the two will be exactly how much portability you need from the device.