Acer is well-known in gaming industry for their Predator series laptops and PCs. This time Acer has brought the “Night of the Predator”, one the biggest gaming and youth carnival in India to Mumbai on November 24th 2018. The event will witness India’s first ever mega PC PUBG tournament and DOTA2 India finale as part of the Acer Predator League 2019 with an overall prize pool of USD 400000 for the APAC Grand Finale. 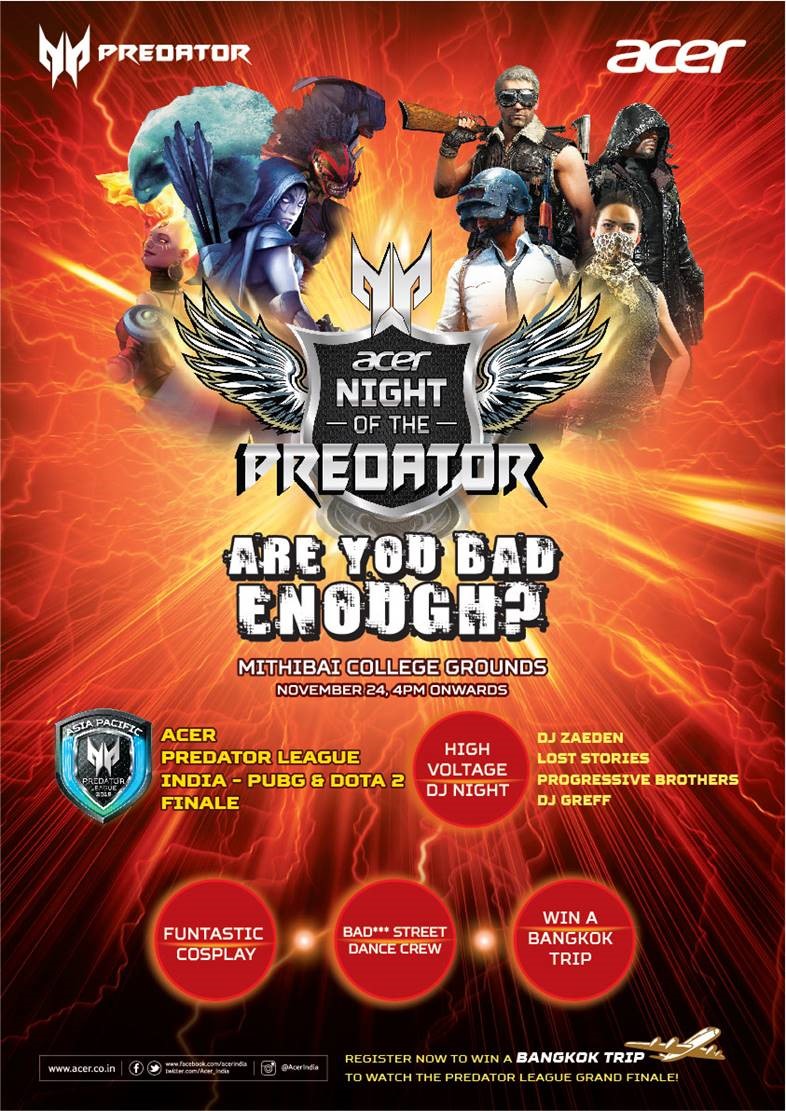 The Predator Gaming League saw over 1400 players and 361 teams playing over 160 hours of PUBG and DOTA2 PC game qualifiers to reach the India finale. DOTA2 also saw café qualifiers across multiple cities all battling to get the coveted spot in the finals.

Night of the Predator will be staged on a larger than life on-ground set-up which will host some of India’s top DJs like ZAEDEN, LOST STORIES, PROGRESSIVE BROTHERS and GREFF along with Fantastic Street dancing, and amazing COSPLAY.

Supported by SRM Institute of Science and Technology, Kattankulathur Campus, Chennai and Flipkart the Night of the Predator is set to be a landmark event in the calendar of e-sports and music fans across India

Night of the Predator is a full-fledged festival in itself, with thousands of audiences and gamers gathering under one roof for the love of gaming and music.
India whose online gaming industry is expected to grow at USD 1 billion by 2021, is gradually becoming progressive towards online gaming and has started considering eSports as a career option realizing the potential of the same
– Mr., Chandrahas Panigrahi, CMO & Consumer Business Head.

For PUBG PC, 16 finalists and two teams from DOTA2 have qualified for the final face off.  The winning team of PUBG PC tournament and DOTA 2 will be representing India at the Asia Finale of the Predator Gaming league, to be held in Bangkok, in the month of February 2019.

For technology lovers and gamers the event will be a treat to the eyes with some of the most cutting-edge gaming PCs and gaming accessories on showcase for the first time in India, and the launch of Acer’s famed and most awaited Predator Thronos Gaming Cave and OJO 500 mixed reality headset.

Acer’s Predator gaming line has earned countless industry awards and accolades for design, innovation and performance and has become the machine of choice for professional gamers. Predator Gaming League reinforces the commitment of Predator brand in supporting the gaming industry in the in India. Acer is the No.1 PC gaming brand in India with the most complete gaming devices line ranging from laptop, desktop, monitor, gaming chairs and gaming headphones, mouse, keyboard, mouse pad and other accessories.