Few days before, following the last version 12.10, Ubuntu 13.04 codenamed as ‘Raring Ringtail’ has been published by Canonical. The latest version comprises a lot of features which are really useful for everyday computing and enough to attract people to the so called Linux and Open Source communities. So, let’s have look on what has been changed in Raring Ringtail.

And we must say that Ubuntu 13.04 Raring Ringtail is a must install OS if you’re an Ubuntu Lover as it comprises a lot features which deeply integrates your Ubuntu PC to everyday computing activities. But for waking up the real beast in the new version, you have to perform some simple but useful things after installing the OS in your PC. So let’s have a look on those activities.

Just like all other previous versions of Ubuntu Linux, this version is also strongly compatible with modern hardware configurations and you don’t need to spend a lot of time in installing drivers and such stuff. Apart from that if you want to enable some third party functionalities such as your Graphic card driver or something like that, you’ve to do it as soon as possible after the installation. 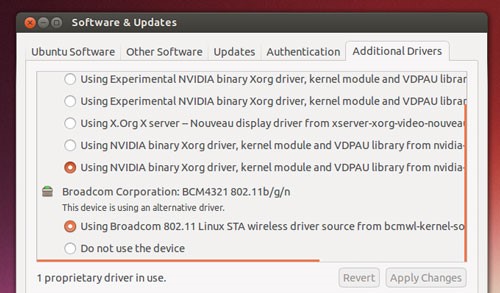 Especially such drivers are essential if you’re using your powerful PC to play games or to seamlessly stream High Definition videos through it. But some Wi-Fi cards also require a third party driver install to work, at least sometimes. You can just go to Software Sources App and then to Additional Drivers tab for installing third party functionalities in your Ubuntu PC.

Due to some legality problems, Ubuntu Linux is not supposed to play standard music or movie files through it by default. But if you want, you can set up the feature during the installation or after the installation by going to this link. Everyone should enable Third Party Codecs as the absence will restrict you from listening to your music/movies.

Raring Ringtail includes some special featured designed for easier Social Networking. So if you want to use such services, instantly you have to connect your social media like Facebook or Twitter accounts to your Ubuntu PC.

Unlike the previous versions, Raring Ringtail comprises a feature called App-Per toggle to restrict the access of specific applications to your SNS accounts. For example if you don’t want to empathy to log into Facebook Chat, you can set it in this window.

Set Up Ubuntu One

Do you have to miss the 5 GB of Free Storage space that Ubuntu Linux offers? No most probably you won’t do so. So it’s always good to integrate Ubuntu One service right after the install. As the Ubuntu One application is available for cross platform, you can access the files from anywhere. In the current version, the sharing option is very much enhanced.

Axe Amazon Suggestions will pop up some cool suggestions in your Dash Home Search which will in turn help you in accessing your contents quickly. In this version, even your Social Media stuff is integrated with the Desktop and it’s quite easy to use, at any time.

There is lot of things we missed in this article! Though Ubuntu comes to the world pre-loaded with some applications like Libre Office and your standard needs. But if you want to make use of Ubuntu in a deeper level, you have to install awesome apps from Ubuntu Software Centre, customizing your privacy needs etc. Do you think we missed any major works to do after Raring Ringtail installation? Please let us know via comments.