There is a new infinite running game in town – Magic Runner. Studio Dream Games has launched an all new horizontal runner game, Magic Runner which is available for free download on Google Play Store for Android phones. With real times run physics, parallax background and intuitive sound Fx, Magic Runner is a class apart in terms of clarity, fluidity of movement, total immersion and levels of difficulty.

Magic Runner is a journey of a hero trying his best to win a battle against malevolent forces and save planet Earth. It has been specially designed and developed as a hard-to-put-down, casual game. The game’s plot centres on King Elex from Earth trying to prevent the malicious Lord of Broy, Bazooka and his army from destroying the beautiful planet he calls home. It is situated in the fictional world of Broy. As they help King Elex on his journey to defeat Bazooka, gamers have to reach deep within for strategic and instinctive manoeuvres to keep the hero on track for his mission.

While playing on my Sony Xperia Z2 running lollipop 5.1.1, the navigation bar didn’t hide or go immersive like it does in many other apps and games, so the right part of game was under the navigation bar for the whole time. Game’s welcome menu is simple. There are few options such as Play, sound on/off, buy upgrades(using in-game currency, no in-app-purchases), achievements, leaderboard, help and information menu about the game. 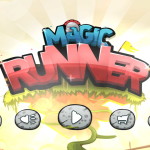 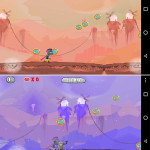 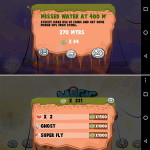 After clicking on play for the first time, game gives you instructions to on how to play it. Controls are simple, swipe down for ducking and swipe up for jumping to avoid obstacles. You have 3 lives in a run, hit any obstacle and you lose 1 life. You collect coins while running and you can use them to buy upgrades(just 3 for now). There are total 16 achievements to unlock.

Magic Runner is the classic battle between Evil vs. Virtue which founder Umang Mathur holds close to his heart. He said,

After creating a strategy-based game like Rama Force, we wanted to develop a casual game this time. We focused on the didactic value of Magic Runner as we want the players to learn beyond the game. King Elex cannot kill anybody in the game, which eventually percolates to the players, who can be children too.

Innovations in MVAS by Aircel for continued growth
Coolpad Note 3 Review: 3GB RAM and fingerprint sensor in Rs.8,999
To Top