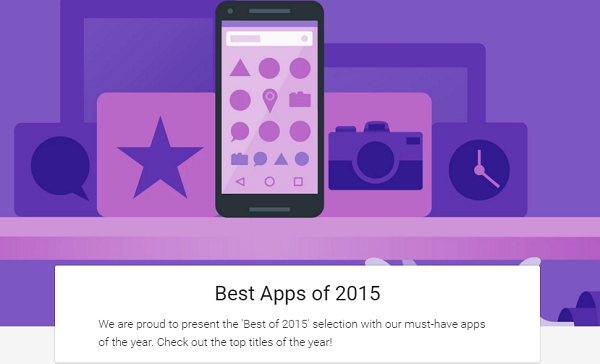 It’s that time of the year when Google comes out with its very own list of best available Android apps on Google Play. The recommendations offered by Google prove to be of lot of help for the Android newbies as well as for veterans. This year’s Best  android Apps list is divided into 8 categories with 5 apps falling into each category.

The selection of apps seems to be location based too. Some apps seem to be globally recommended like Skype, Google Photos. In some regions, there might even be a “Made in” category, like “Made in the India” or “Made in USA.”

The selections seem to be have been influenced on the basis of number of installs, downloads and user ratings. Overall, the categories fixed to classify the best apps by Google are: Make in (Country specific), Communication + Social, Photography, Tools + Productivity, Entertainment, Personalization, Tablets and Family.

Surprisingly enough, the much publicized Google photos app is placed on no. 5 position in the Photography category in which PicsArt Photo Studio takes the top spot. In the High profile Make in India category, the 5 slots are occupied by CookBook Recipes, Zomato, Bookmyshow, Myntra and Mobikwik apps, respectively.

All in all, the best android apps 2015 list seems to be a mixed mag. Some choices are great enough to be on the Best Apps list while some of them do not deserve to be on the list at all. Whatever the selection may be, Best Apps list will provide some much needed help to the Android newcomers out there and also some of the more enthusiastic Android users who like to explore different types of apps.

Commonfloor Property Search App! Your Trusted Companion In Finding The Right Property
The OnePlus X – In Depth Review
To Top